WHY I SELECTED TO PICTURE AN OLD SHOE?

Why are these shoes? This question is flustered a lot of viewers sometimes causing  contradictory opinion. A few years ago the first portrait “Shoes” had appeared but it had not been any formed idea. There was more a joke. 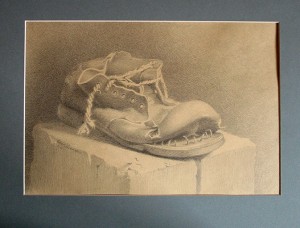 Then I thought that this forlorn useless thing which a man had disposed of in a landfill this shoe could be subject to careful observation.

After drawing my first shoe I noticed that the study of his nature had been capture my attention more than just a joke. What is there an interesting in clothes which residing with one person? Primarily clothe reflects the lifestyle of the host, habits and preferences as a sofa pressed in the place where the owner likes to sit down most often and the comfortable shoes become not only according to the different anatomical features hosts, but also a reflection of the character. There’s a different attitude to clothes and shoes for each person and this behavior is an important part of human nature. One person has only a single pair of shoes and because he is always taking care of it he will mend, he will lubricate cream and carefully wash the dirt. But the other person will not do anything for saving his shoes. Therefore, during the consideration of shoes we can tell a lot about its owner. So the picture is more interesting if an artist is observant and thoughtful because there is the task of the artist in the painting to determine the image of a man and to show it to the audience.